So you think that you don’t need a Wedding Rehearsal? Really? Will it make a difference? Can’t I just practice walking with the bridesmaids at home? You have spent thousands on your big day but you want to save costs by not having a rehearsal? That’s a bit like buying a car and not driving it! So what is the importance of a Rehearsal?

A good rehearsal consists of many aspects and only 1 part is the actual walking down the aisle.

On average I would say 98% of couples have a rehearsal. And with good reason. When planning for a rehearsal – ask everyone involved who is taking a part in the ceremony. They can then practice their part so confidence shows through. there is a huge difference between weddings where everyone feels confident and relaxed because they have the knowledge of what’s expected. Why spend all that money on a wedding to have things go wrong when only an hour rehearsal can sort all or most of these problems out? Things like:- *Where to stand- great spot, but that time of year is the sun in your eyes and the party is all squinting?

*What about daylight saving, have you allowed for the time change? *What side is the groom standing on? (There is no wrong side.)

* Vows (I will hand them to you but is the print too small for anyone with eye problems?).

*Who is the bride giving her bouquet to and when? (too early, few photos in the ceremony with the flowers.)

*Ring Ceremony – “Is it a repeat after me?” Who has the rings?

*How are they given, in a box? (Small details make a big difference, example;- I always says take the rings out of the box and let the ring bearer take the box back with him, because usually the couple have in their hands already flowers, microphone, vows on a card, you don’t need a box to worry about too).

*Bridal Party – Who is walking first? Practised in those new shoes or are we stumbling ? The flowergirls and pageboys don’t want to walk. Who looks after any children that may decide they don’t want to be a part of the ceremony. A smooth transition to a friendly face makes all the difference for children. How is everyone standing?

*Have they been coached to stand correctly and how to line themselves up to give a polished look for the photos. Seating -Guests where do you want them seated. Sometimes there is allocated seating only. *The signing table- placement of the table and chairs.

*Music – correct selection for:-1. Walking down the aisle. Is the song long enough?

*How should I walk?

*Who is letting the Celebrant know you have arrived and are ready to start the music?

* Walking Out - Is the wedding party doing a formal walk out or dispersing into the crowd?

* Playlist – Is there one, for before and after the ceremony?

* Ipod- Who is running the music at the ceremony? Have they got a running order to match the music? They should be at a rehearsal.

*Ceremonies that include things like - Sand Ceremony, Candle Lighting Ceremony – amazing what can go wrong there if you haven’t practiced.

*Plan B – When marrying outside, mainly because of rain but sometimes excessive heat or other reasons, the couple need to move the ceremony inside or to another location.

We usually practise this area too. Saying –“It won’t rain on my wedding day!” Ask us how many times we have heard that before and it’s ended up a wet soggy day.

Ok not convinced? – Here are some things that have happened at weddings with no rehearsal?

Whether it be speaking into the microphone, or practising a reading. (I’m amazed at the amount of brides/grooms and guest speakers that haven’t read through or practiced their vows/ring ceremonies and readings and of course stumble over words and paragraphs!) or practise walking down the aisle with their beautiful daughter.

Groom is standing beside me and suddenly thinks he’s on the wrong side and is whispering to me –“where do I stand?

He moves up so close to me and the wall that I’m pushed up to a table and gently pushing him back and trying to direct him as the bride is walking down the aisle.

Someone is given the music on ipod and they announce to me 2 mins before the ceremony that they have never used an ipod before!

There is a table supplied for signing at the venue but the staff have not been informed and as soon as the ceremony started they took the table away?!!

Someone throws a microphone in front of us at the last minute and it’s on a stand and we can’t get it off.

I usually use my own so I have no problem but was told they would supply one. We looked like a trio in a band.

The person who is doing the reading has been given the verse by the couple but he has never seen it before and stumbles over every word. I always give the reader a copy of the reading at a rehearsal to take home and practice. Sometimes we have needed to change words in a reading because the person reading can’t pronounce them.( That’s ok, but if a rehearsal had been completed we could have changed any wording and save them the embarrassment of struggling in front of a crowd).

A friend is running the ipod music at the wedding ( lots of experience with gadgets, full of confidence – works at a Hifi store but messes up the music completely! He said he didn’t need a rehearsal!!

Yes it is more work for us but as a professional Marriage Celebrant we want to see happy relaxed wedding parties and we want you to have the most perfect day!Ok still no rehearsal? – Good Luck!! 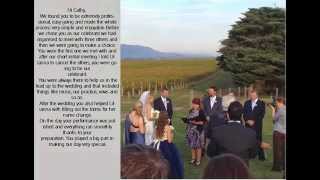 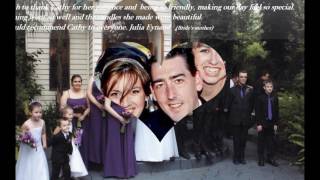 One of Cathy's Video's where you can see recommendations and pics of 12 ceremonies. 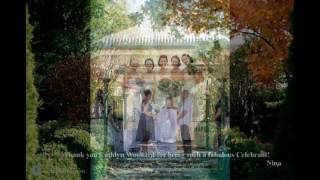